How the FCC and Congress Can Increase Broadband Adoption

Voqal is dedicated to helping solve the digital divide. Much of the focus on solving this challenge has been on providing every American with access at home. But access is only one side of the coin. As we highlighted in last week’s blog, the broadband adoption gap in America remains extremely concerning and persistent.

While 94.4% of Americans have broadband access offered at their homes, just 65.1% actually subscribe to 25/3 Mbps service. By our calculation, 29.3% of households would be the equivalent of about 37 million households or 94 million Americans. According to most studies, this 29.3% gap is mostly due to a lack of affordability, the absence of a computer or internet-connected device, or a lack of digital skills.

The good news is there is already a federal subsidy program to help low-income Americans access telecommunications services. Created in 1985, the Lifeline program originally offered low-income Americans an opportunity to access affordable phone service. The program has since expanded to mobile phones and broadband. 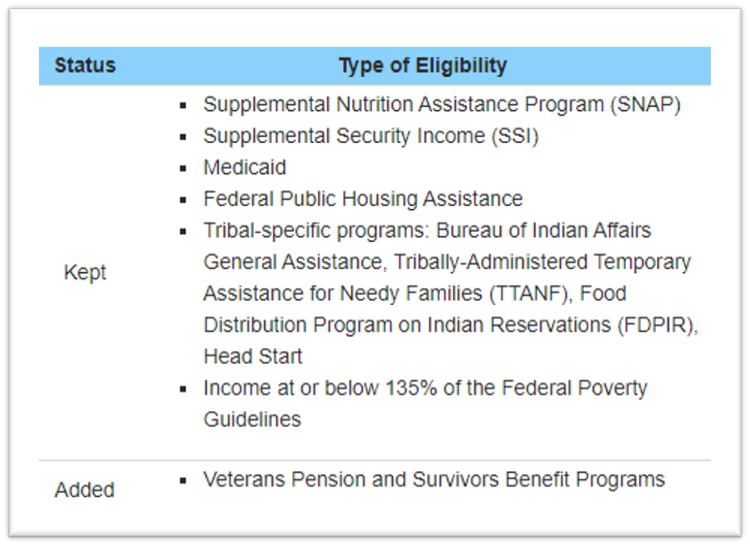 One reason for the low participation might be the FCC’s repeated attacks on the Lifeline program. In fact, according to a recent article from Benton Institute for Broadband and Society, since 2017 the number of Lifeline recipients has decreased by 40 percent.

Fortunately, in late April, more than 140 members of both the House of Representatives and Senate sent a letter to the FCC urging them to do more to promote the Lifeline program to newly-eligible Americans due to job loss and/or reductions in income.

Congress and the FCC need to take a serious look at existing subsidy programs, especially during this pandemic. There are simple modifications that can immediately help close the digital divide. While creating a new program is certainly an option for addressing this issue, given the urgency of the crisis, Voqal supports expanding existing programs. Voqal proposes the following plan:

1. For low-income families with students, Congress and the FCC should expand E-Rate to include off-campus connectivity. Legislation has already been introduced to accomplish this goal. With approximately 7 million students lacking connectivity at home, this would go a long way towards closing the digital divide for students and their families. Using E-Rate allows for educators to play a larger role in identifying and sustaining connectivity to families who may be living paycheck-to-paycheck.

2. For families without schoolchildren, the Lifeline program should be expanded to cover a larger portion of the broadband bill. With typical 25/3 Mbps broadband bills at $50-$65 per month or more, the plan should contemplate a subsidy closer to that total. Providers throughout the COVID-19 pandemic have voluntarily increased data caps and offered additional benefits. There’s no reason they can’t develop an affordable broadband plan – around $25 – that the FCC could help fund.

3. Expansion of the contribution base into the Universal Service Fund (USF) – which supports E-Rate and Lifeline – is needed to ensure funding will be available for the long-term. Right now, only landline telephone subscribers are contributing to USF. As the number of landline phones declines, the burden for remaining landline subscribers continues to climb. Requiring broadband, cell phone, and other communications service subscribers to contribute to the fund spreads the cost among a larger group of Americans and creates a mechanism to fund affordable broadband well into the future.

The COVID pandemic has put a spotlight on America’s connectivity crisis. Broadband is no longer a luxury, especially when the government is forcing Americans to work, learn, stock their pantries, and entertain themselves from home for an extended period of time. The FCC and Congress can quickly modify these existing subsidy programs and start to tackle the affordability divide affecting far too many Americans. Voqal urges action now.