Lessons from DEI Changemakers: Power as a Force for Good

In her latest post on the #makingairwaves blog, Mary Coleman shares more lessons about integrating DEI into an organization’s culture from her participation in DEI Changemakers.

Until recently, when I heard the word power I connotated its worse consequences. Greed, corruption, and negligence all came to mind when I associated power with an individual or group. I suspect this to be true for most in the U.S., as we are conditioned to equate power with wealth and control, as seen in many psychological studies.

The Stanford prison experiment is perhaps the most popular example of how even simulated power can affect one’s behavior. Metamorphosis shared one about young students’ abuse of power during a classroom experiment to teach discrimination.

This deference to authority is reflected in my own relationships growing up. Child, parent. Student, teacher. Employee, boss. I was never encouraged, and often downright discouraged, from questioning an authority figure. I was punished – groundings, detentions, reprimands – when I pushed a boundary. I was rewarded – allowances, good grades, promotions – when I did what was expected.

But, based on whose expectations? Why did I give others the power to establish and examine my life choices? In some situations, my values and actions aligned with those around me (or I was too young to have a say) and there was no conflict between those in power and me. When conflicts did occur though, there was no room for contestation on my part.

When reviewing the foundations of DEI this week, the Metamorphosis team gave us a simple framing to connect to the heart of this work.

Power. There it is. If equity is a force for good, though, how can power be involved? 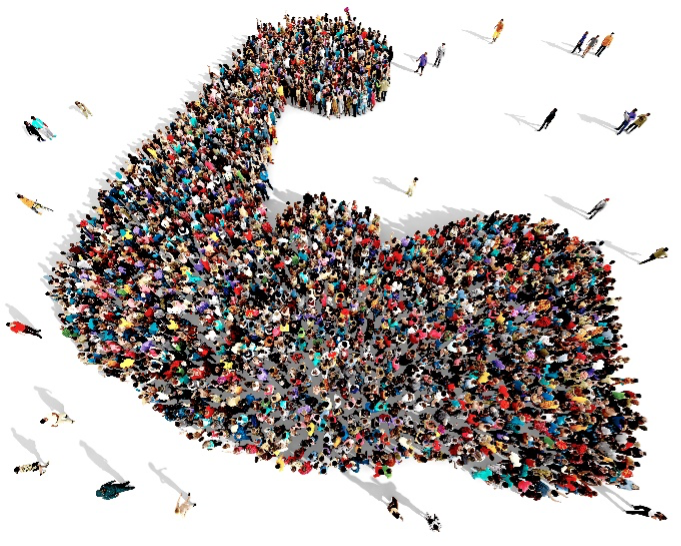 Photo by Arthimedes from Shutterstock. Image Description: A group of people standing in the shape of a flexed arm making a fist to indicate people power.

After interrogating my association between power and maliciousness over the years, thanks to the lessons from folks like Eric Liu and adrienne maree brown, I realized that power is not defined by its hateful outcomes. Like most things in life, we can impact the consequences in several ways. It is what we do with power that makes a difference. This lesson came full circle with that framing.

As I move up the ladder in our modern workplace, I challenge myself every day to use this positional authority to empower, engage, and encourage others. I work hard to reject the conditioning around power to dictate, direct, and demonize. I found it is easy to fall into patterns of “need to know” and “because I said so” and a lot more arduous to create systems that allow for “how do we tell everyone” and “what did I miss.”

In this process, though, my hope is to create a new way of being in relation with others, where we are not focused on titles and capitalistic credentials, as Molina Speaks says, but rather on talents and lived experience.

I learned early on in my career that my values must align with my workplace. This is especially important to me because I seek to integrate these ideals into any decision-making opportunity. I am lucky to be in an environment that fosters and encourages a stronger, correlated relationship between organizational principles and actions. In doing so, I see us moving away from traditional power hoarding and toward transformative power-sharing.

When it is the most exhausting, I think of Jimi Hendrix and his words: “When the power of love overcomes the love of power the world will know peace.” If I can lead and participate in communities with love at the core, maybe I can be part of the powerful wave to truly reform our systems and reject white supremacy once and for all.

Read the first part of this series here.