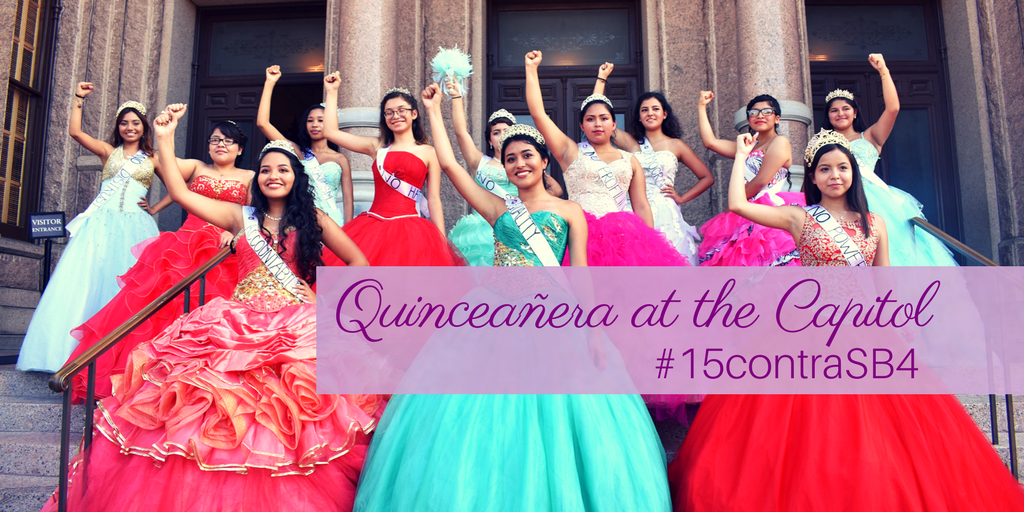 Jolt is a Texas-based, multi-issue organization that builds the political power and influence of Latinos in American democracy. Jolt gives Latinos the power to make change, so they can have a say in how Texas is run. With support from Voqal, Jolt built a movement of young Latinos aimed at pushing back against policies that reduce the rights of all Latinos in Texas.

Jolt supports the movement in multiple ways. Its Leadership Institute, a seven-week course geared towards increasing leadership, organizing and advocacy skills, taught its members to advocate on their behalf. This empowered base led to one of its most successful organizing actions to date – Quinceañera at the Texas Capitol.

Quinceañera at the Texas Capitol was a protest and performance against SB4 that used song, dance and poetry by Jolt members to highlight the problems with the law. Using the power of art, brown pride and girl power to protest, 15 teen members performed choreographed dances to traditional Mexican music and Hamilton’s immigrants hip-hop song. The event went viral reaching an estimated 50 million Americans and showed the true power of Latino youth to protect the rights of their community.

The effective empowerment of Jolt’s members is perhaps best exemplified by Viri Sanchez. Sanchez graduated from the inaugural Leadership Institute course and helped lead Jolt’s Quinceañera at the Texas Capitol. Viri is a 16-year-old DACA recipient who joined Jolt because she was tired of seeing her community attacked by state legislators. During the Leadership Institute, Viri learned to recruit and organize classmates and how to tell her story to the media. Thanks to the skills she learned she was featured in stories by Teen Vogue and MTV. Expanding the Leadership Institute helps more young Latinas like Viri amplify their voice to fight for their community.

Since its inception, Jolt has worked tirelessly to elevate the Latino community’s voice in Texas. Its work has enabled the community to fight back against anti-Latino policies. As strong supporters of a more socially equitable world, Voqal is proud to have supported Jolt’s important work to empower young Latinos and looks forward to their continued efforts to make Texas a more open and accepting place for all.