How Will Congress Spend Over $40 Billion in C-Band Auction Revenues? 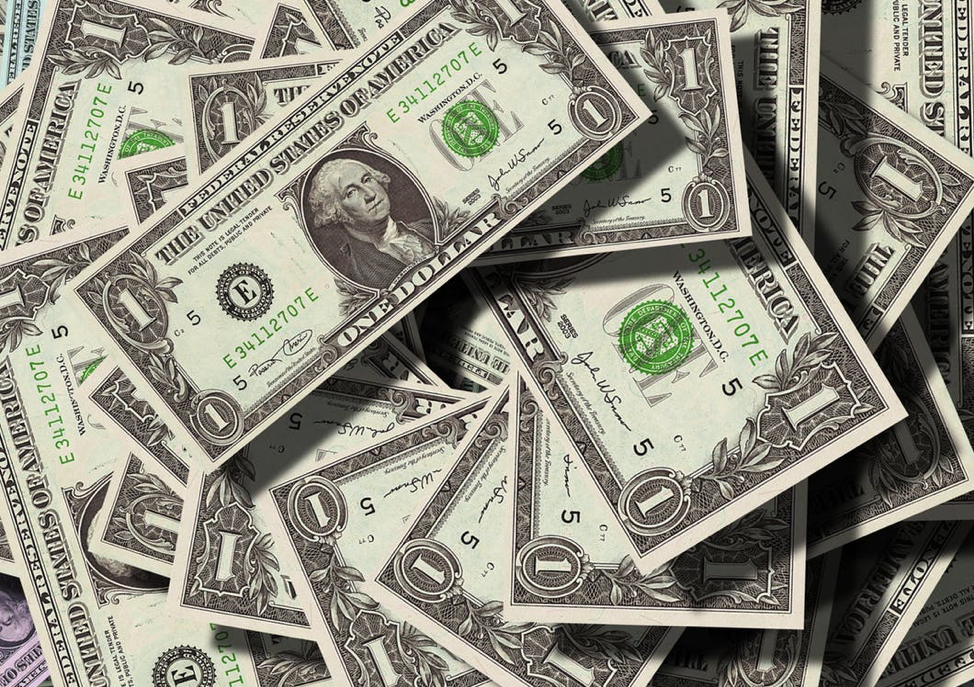 In the race to 5G, American wireless companies are sorely lacking one essential ingredient: mid-band spectrum. Often dubbed the “goldilocks” spectrum, mid-band offers an ideal combination of coverage and capacity that lower and higher frequencies do not offer. As we have pointed out in the past, mid-band makes 5G both possible and affordable, but only one carrier – Sprint – has any meaningful amount of mid-band. (Full disclosure: Voqal leases its 2.5 GHz mid-band spectrum to Sprint.)

A recent announcement by FCC Chairman Ajit Pai indicates that could change. Chairman Pai and the FCC will pursue a public auction of a portion of the 3.7 to 4.2 GHz spectrum band – also known as the C-Band – by the end of 2020.

Today, the C-Band is used by satellite operators to deliver programming from over 100 TV and radio stations to nearly 120 million American households – think live sports, cable TV, HBO and/or public radio. But due to advancements in technology, satellite operators can deliver the same programming content with far less than the 500 MHz they are currently allowed to use. Couple that reality with extreme demand for mid-band from both fixed and mobile operators, and you have the recipe for a blockbuster auction.

Under the Pai proposal, 280 MHz of the C-Band would be repurposed for broadband (both mobile and fixed) and sold at auction, 20 MHz would be reserved as a guard band to prevent interference and the remaining 200 MHz would be used to deliver existing C-Band programming services. The full details of this proposal are scheduled to be released by January 9, 2020, and the FCC is expected to vote on its C-Band order at its regular monthly meeting on January 30, 2020.

One reason why the FCC is pursuing a public auction is relentless pressure from Congress, specifically Sen. John Kennedy (R-La.), whose appropriations subcommittee oversees the FCC’s budget. His argument that a public auction would be more transparent and would also raise revenue for the federal government (as opposed to foreign satellite companies operating in the C-Band) eventually won the day with the Commission.

So how much money would a C-Band auction generate? According to estimates, the FCC could raise as much as $30 billion to $60 billion. It is possible carriers may pay more, but there are other factors that will influence the price, including:

The average price for wireless auctions since 1997 has been roughly $0.45 per MHz-POP. If C-Band spectrum were to sell for a slightly higher average price of $0.50 per MHz-POP, the auction would raise roughly $45.8 billion. Sounds great, right? There is just one catch: under current law, all proceeds from the C-Band spectrum auction would automatically be deposited into the U.S. Treasury.

Congress is aware of the auctions statute and is already pursuing a change in the law to accommodate the C-Band auction. This week, the Senate Commerce Committee approved S. 2881, C-Band legislation that would modify the automatic Treasury deposit. The legislation would require at least 50% of C-Band proceeds (up to $40 billion) to be deposited in the Treasury. If the auction raises more than $40 billion, a higher percentage would be deposited in the Treasury. The bill also sets aside 10% of proceeds for broadband deployment in underserved and unserved areas. Some revenue may also go to the Spectrum Reallocation Fund for studying other spectrum bands.

Once 50% for the Treasury and 10% for rural broadband are deducted, that leaves approximately $16.87 billion. So, what would happen to the rest of the cash? Here’s our prediction: 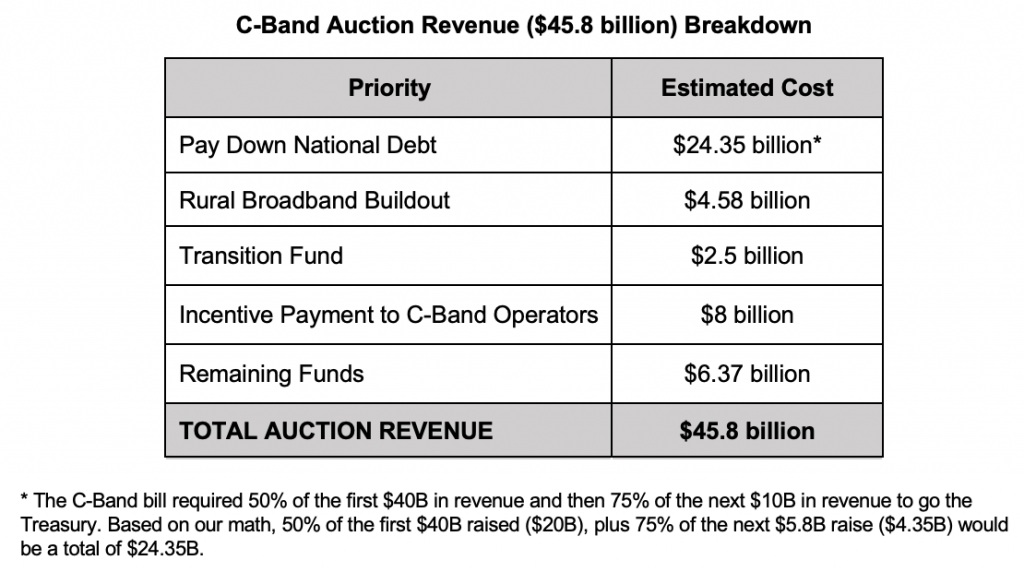 Transition Fund ($2.5 Billion) There is bipartisan agreement that C-Band providers and consumers should not be impacted by the transition. Accordingly, there must be compensation to transition incumbents to operate only in the upper 200 MHz of the C-Band. This transition would include filters on ground stations, antenna tuning, upgrading equipment with new compression technology and other expenses. A November filing by the C-Band Alliance estimated that 100,000 filters would need to be installed on an estimated 35,000 antennas at C-Band earth stations in order to clear 300 MHz of spectrum. Up to 8 new satellites would need to be constructed – 6 for launch and 2 as backups in case of a launch catastrophe. CBA estimates the transition would cost $2.5 billion to $3 billion and take 18 to 36 months from the end of the auction.

There are two policy options to address the transition – either the FCC could require winning bidders to negotiate with individual earth stations and satellite operators, or Congress could establish a transition fund from auction revenues. If the FCC pursued the first option, it would likely depress prices for the spectrum and could also cause a legal challenge from satellite operators unwilling to transition. For the second option, there is a precedent for this type of Congressionally-mandated transition fund. In 2012, when Congress authorized the Broadcast Incentive Auction, it created a TV Broadcaster Relocation Fund for broadcasters who did not voluntarily sell their spectrum to upgrade equipment and remain in operation. In total, Congress spent about $1.75 billion on this fund.

Incentive Payments to C-Band Incumbents ($8 Billion) There is growing concern that incumbent satellite operators may sue if they are not compensated for giving up their “substantial legal rights” to the C-Band. There are two options to address this – the FCC could require winning bidders to negotiate to purchase licenses or Congress could allow some auction revenue as direct payments to C-Band satellite operators. Option two seems much more likely. POLITICO reports that “Sen. John Thune (R-S.D.), a co-sponsor of S. 2881, said the satellite providers occupying the C-band need an incentive to sell off their valuable airwaves.” Thune is concerned satellite operators might sue, setting up a multi-year lawsuit that would further delay mid-band spectrum from reaching the market for 5G. Others, like Kennedy, are reportedly blocking the C-Band legislation to prevent a “back door” by which foreign satellite incumbents could receive such an incentive payout. But on Wednesday, it was reported that Senate Commerce Republicans may be attempting to attach C-Band language to a Continuing Resolution (CR) that would fund the government beyond December 20, when current funding is set to run out. This could make it tricky for Kennedy and others who oppose the C-Band bill to block it. And, of course, the House would need to add similar language and the president would have to sign the new CR for it to be law.

The soap opera that is the C-Band has many more episodes left. For now, we’ll be tracking this legislation and the FCC draft order closely. That’s all for part one of our C-Band analysis. In part two, we will be sharing what we think is the best strategy for investing C-Band revenues in order to better address the digital divide. Stay tuned!