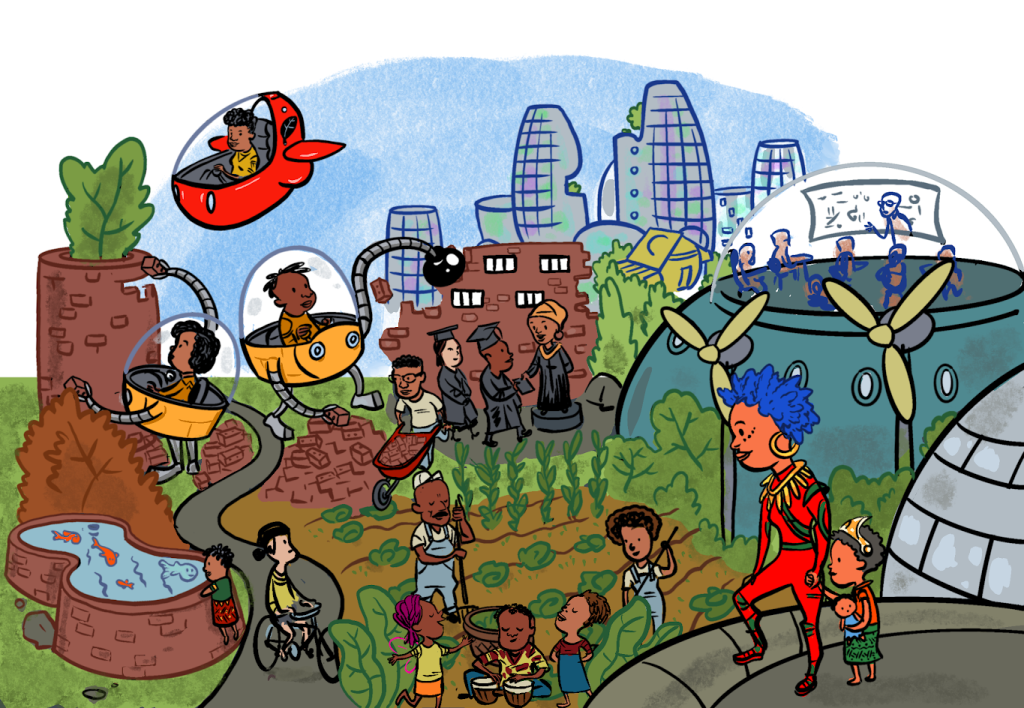 Voqal is excited to announce the 2022 Voqal Fellowship cohort. The Voqal Fellowship is an investment in people as individuals and budding entrepreneurs. It is a talent accelerator aimed at giving bold visionaries a chance to be at center stage. The 2022 class will continue the Voqal Fellowship’s legacy of supporting the individuals who are making a real difference in the world yet are often overlooked by traditional funders. Members of this year’s class are:

Ini Augustine (she/her) is a network engineer that occupies the space between equity, technology, and art. She was also named Aspiring Businesswoman of the Year by the National Association of Women Business Owners in Iowa. Her organization to close the digital divide, Project Nandi, was launched in direct response to Covid-19 and the George Floyd protests. Augustine’s project, the Black Internet Collective, would build on Project Nandi to create a community-owned Internet Service Provider (ISP) with a Black broadband summit.

Kiela Smith (she/her) is a charismatic servant leader who loves inspiring artists and others while connecting them to resources. She brings grit and street training as a lifelong Chicagoan, 17 years as a teaching artist, and 30 years of professional experience consulting, planning, and creating collaborative community-based mural projects. Smith’s project, Artists Design the Future, engages a participatory, grassroots planning process for developing a worker cooperative and idea planning for an art space building that positions citizen artists as investors, owners, and stakeholders.

Marq Mitchell (he/him) is the founder of Chainless Change. He is a returning citizen, abolitionist, visionary, and community leader. In addition to being the lead strategist for Chainless Change, Mitchell serves on a variety of local and statewide advocacy boards and initiatives related to ending mass incarceration and other systems change efforts. Mitchell’s project, Decarcerate Broward Coalition (DBC) is a community-rooted effort in the early stages of development. DBC is made up of local organizing groups and individuals working together to end mass incarceration in South Florida and to increase accountability and transparency regarding abuse by local correctional institutions and law enforcement.

Mattie Abraham (he/him) advocates for those who are imprisoned enduring trauma after trauma. He also advocates for families who suffer from the violence that the prison space inflicts upon them. Abraham’s project, the Prisoner’s Support Group will form a connected network of support groups led by currently and formerly imprisoned people, drawing on approaches to care and support rooted in the communities’ lived experiences that oppose the criminalizing logics and systems dominating growing industries of re-entry, prisoner rehabilitation, and mental health care.

Mu Knowles (they/them) is an Afro-Indigenous, trans, non-binary queer liberation steward born and raised in the historically Black Hilltop Neighborhood on Puyallup Tribal Territory (Tacoma, Washington). Knowles holds a bachelor’s degree in Sociology and Anthropology from the University of Puget Sound where they focused on the study of classificatory and categorical systems within the United States as they relate to power, disenfranchisement, oppression, and inequity. Knowles’ project, the Intergenerational Healing Circle: Reclaiming and Sustaining Black and Indigenous Organizing will offer robust, ethical, and sustainable alternatives to settler colonialism and capitalism through in-depth participatory research. It will allow Black, Brown, and Indigenous stewards, organizers, artists, healers, creators, writers, and storytellers to reclaim autonomy and agency in cocreating the practices, strategies, and solutions that create a more equitable, accessible, and just world.

Suzette Burton (she/her) is an award-winning filmmaker and received a Bachelor of Fine Arts in Film/Video from Pratt Institute. She directed the short documentary film “Disconnected” about her father’s mysterious death which premiered at The BAM Theater (Brooklyn Academy of Music) in 2006. Burton also co-produced the documentary “Daddy Don’t Go” directed by Emily Abt. Burton’s project, Susy Documentary Film and Social Impact Campaign, is a social impact campaign amplifying the growing movement to end hair discrimination in the United States. Anchored by the amplification of cultural narratives, it aims to uplift the historical significance and beauty of Black hair.

William Isom II (he/him) is a sixth-generation East Tennessean and directs the Black in Appalachia project across seven Appalachian states. He has and continues to work with regional public media outlets, social justice formations, university departments, and a whole bevy of small, locally specific cultural, social, and religious entities. Isom’s project, Black in Appalachia seeks to develop and implement a Black-led, cooperative, social entrepreneurship model for a rural field office in Whitesburg, Tennessee.

As in recent years, the 2022 Voqal Fellowship is a full cohort of eight social changemakers. However, due to the sensitivity of the work involving one project, we are not able to publicly share the details of the Fellow or their project. This highlights the continued need to support those on the ground who call out power imbalances and threaten their very foundation. Our liberation is tied up in each other.

“In a time where social and racial inequities continue to present challenges for our country’s future, it is more important than ever to support innovative changemakers who have bold ideas to advance progressive social change. This year’s cohort exemplifies that ideal and we look forward to watching their visions become a reality over the course of next year,” said Voqal fellowship program manager, Mary Coleman.

The Voqal Fellowship officially begins with an in-person convening in April in Denver. Fellows will meet each other and start to develop the relationships and connections central to the program. Voqal Fellows receive a $30,000 stipend and a community of learning to work on their projects for six months.

You can learn more about the 2022 Voqal Fellowship program and past cohorts on our fellowships’ page.