Building a Movement for Publicly Funded Elections in Portland 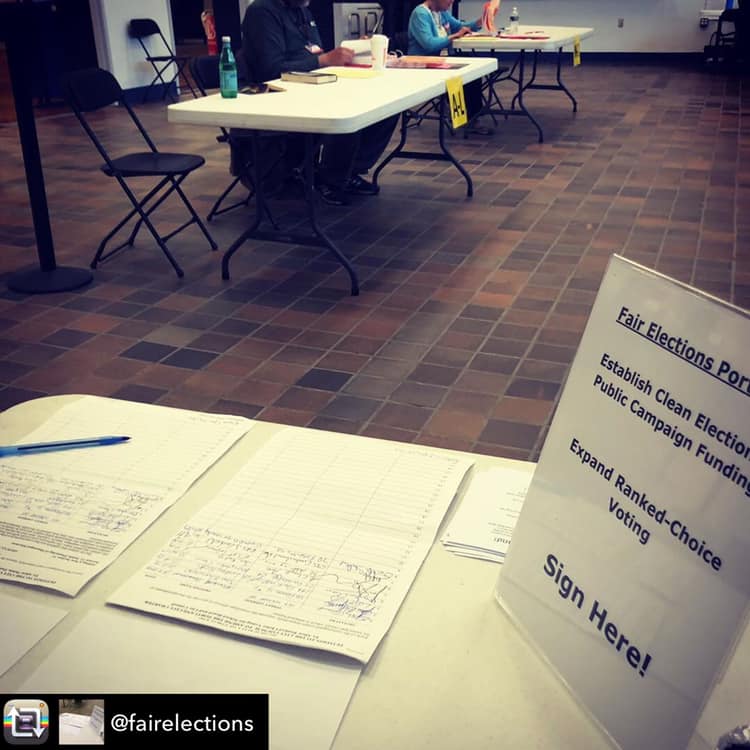 Maine Citizens for Clean Elections (MCCE) Action works to ensure that Maine’s campaign finance laws, elections and government serve the public interest, both in principle and in practice. It engages Maine residents from across the political spectrum, using research, education and outreach to further fairness, inclusion and opportunity in politics. Thanks in part to support from Voqal, MCCE Action laid the groundwork for a campaign to bring public funding to municipal elections in Portland, Maine.

In April 2019, it launched Fair Elections Portland, a movement aimed at creating public funding for city council, school board and mayor races. There was a groundswell of support from many segments of Portland calling for more local control and diverse representation. Harnessing that and the success of an earlier charter amendment campaign requiring additional campaign finance reporting, Fair Elections Portland built the case that the dramatic increase in the costs of running for local office was shutting out everyday Portland residents from representing their neighbors. In fact, in July 2019, it was reported that candidates for mayor had already raised more in four months than they had in the previous election’s entire cycle!

And this argument resonated with voters. In order to qualify for the ballot, the measure needed to meet a signature threshold of 6,816 or 25% of Portland’s voter turnout in the last gubernatorial election. Thanks to the work of MCCE Action, over 8,500 signatures were submitted in August, setting a new record for ballot initiatives in Portland. This was thanks to the efforts of the more than 100 volunteers, including many who were new to the money in politics movement.

The education and training provided to volunteers by MCCE Action were also vital to this success. Early in the campaign, a potential volunteer questioned why the campaign needed to include public funding for school board members. It was hard to picture corruption by campaign donors in that context, he argued, not like with city council and the mayor. Then, during signature collection, he came in from a shift and told staff about the conversations he’d been having with voters whose top issue was school funding. “Parents like them should be able to run for the school board, without having political connections or a lot of disposable income!”

At Voqal, we believe that a socially equitable world isn’t possible without a populace that is able to actively participate in democracy. The efforts of groups like MCCE Action to ensure local elections are open to everyone, regardless of their access to large sums of money, is vital to making that possible. We are excited to have the opportunity to support this work and look forward to the continued work of MCCE Action and others to reduce the influence of money on our democracy.