Building a Movement for Racial Justice that Empowers Minnesotans 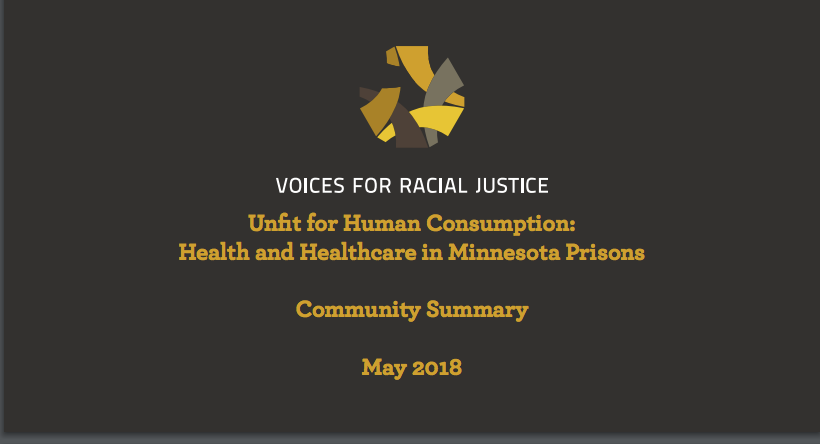 Voices for Racial Justice advances racial, cultural, social and economic justice in Minnesota. It does this through organizer and leadership training, strategic convenings and campaigns, and research and policy tools. With support from Voqal and others, Voices for Racial Justice was able to build a movement that empowered those most affected by racial inequity to influence the system in a positive way.

Thanks to additional funding from the Minnesota Department of Health, Voices for Racial Justice was able to examine the health impacts of incarceration. This community-led research led to the release of a report titled Unfit for Human Consumption: Health and Healthcare in Minnesota Prisons. Listening sessions that informed this research led to key policy change priorities, including campaigns to limit the practice of solitary confinement and to bring back the office of ombudsman for corrections.

The impact of this work can be best illustrated by the reaction it solicited from Voices for Racial Justice members and how the organization responded to that reaction. One member of the team was the mother of a man who has a life sentence at the Stillwater prison. She was a diligent researcher — but as she interviewed people formerly incarcerated, she started to hear stories about the conditions and health services in the prison system. Some of what she was learning was worse than what she had known from 18 years of her son’s incarceration. What she began to realize was that her son, in an effort to protect his mother from worry, did not share everything with her.

Voices for Racial Justice did not take this revelation lightly. It took time to recognize how this process was impacting not only this mother but all of its community researchers. It realized that one consequence of centering on those with direct experience in a system of oppression is the possibility of perpetuating or worsening the already existing trauma.

Fortunately, thanks to its expertise in organizing around these issues, it had the foresight to slow down and take time to process the impact of this research on its members. It made conscious efforts to share meals together, to attend events and even to laugh. Those elements, which may seem extraneous to a traditional process, were an important part of its work. This decidedly human-centric approach enabled the mother to feel a great deal of pride in what she was doing to bring these stories to light. For the first time in many years, she had a voice and influence in a system that had usually made her feel powerless and hopeless.

Voices for Racial Justice is building a strong framework for real progress on racial justice in Minnesota. Furthermore, its understanding that this work is only going to be successful if it is conducted with a deep empathy for those who it affects is vital to moving towards a more socially equitable Minnesota. Voqal is proud to have supported this work and looks forward to Voices for Racial Justice’s continued efforts to advance racial equity in Minnesota.