Continue the Fight for Net Neutrality 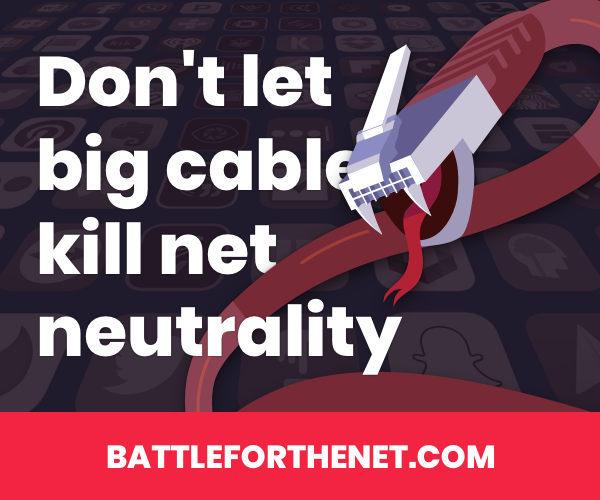 Voqal is a proud supporter of a free and open internet. Unfortunately, in June the Federal Communications Commission (FCC) successfully repealed the very net neutrality rules that ensure such an internet exists. The good news is that many of Voqal’s grantees (and other like-minded organizations) have continued the fight to reinstate these rules. Even better, there are several ways everyday Americans can help with this important work.

Continue to Raise Awareness on Social Media
It is important to make sure others don’t let such a brazen attack on net neutrality become the status quo. In order to keep this issue at the forefront of public policy, individuals can raise awareness on their favorite social media channels. Click here for some great artwork you can use to show your support on your preferred social media platform.

Attend or Host a Public Event in Support of Net Neutrality
Another great way to raise awareness around net neutrality is to gather people together to rally in support. It is important to show that people care about this issue all over the United States, whether that be in the rural heartland of Iowa or the urban coast of Los Angeles. To connect with other supporters of net neutrality in your area, click here.

Contact Congress
Net neutrality advocates need a simple majority of House members to sign on to a “discharge petition” in order to force a vote on a Congressional Review Act (CRA) aimed at reinstating the rules that were repealed by the FCC. While the time for accomplishing this goal is short, you can still call or email your representative and demand they take action to protect net neutrality now.

Access to an internet free of censorship and throttling is key to an engaged and informed public. Voqal encourages you to make your voice heard on this important issue.