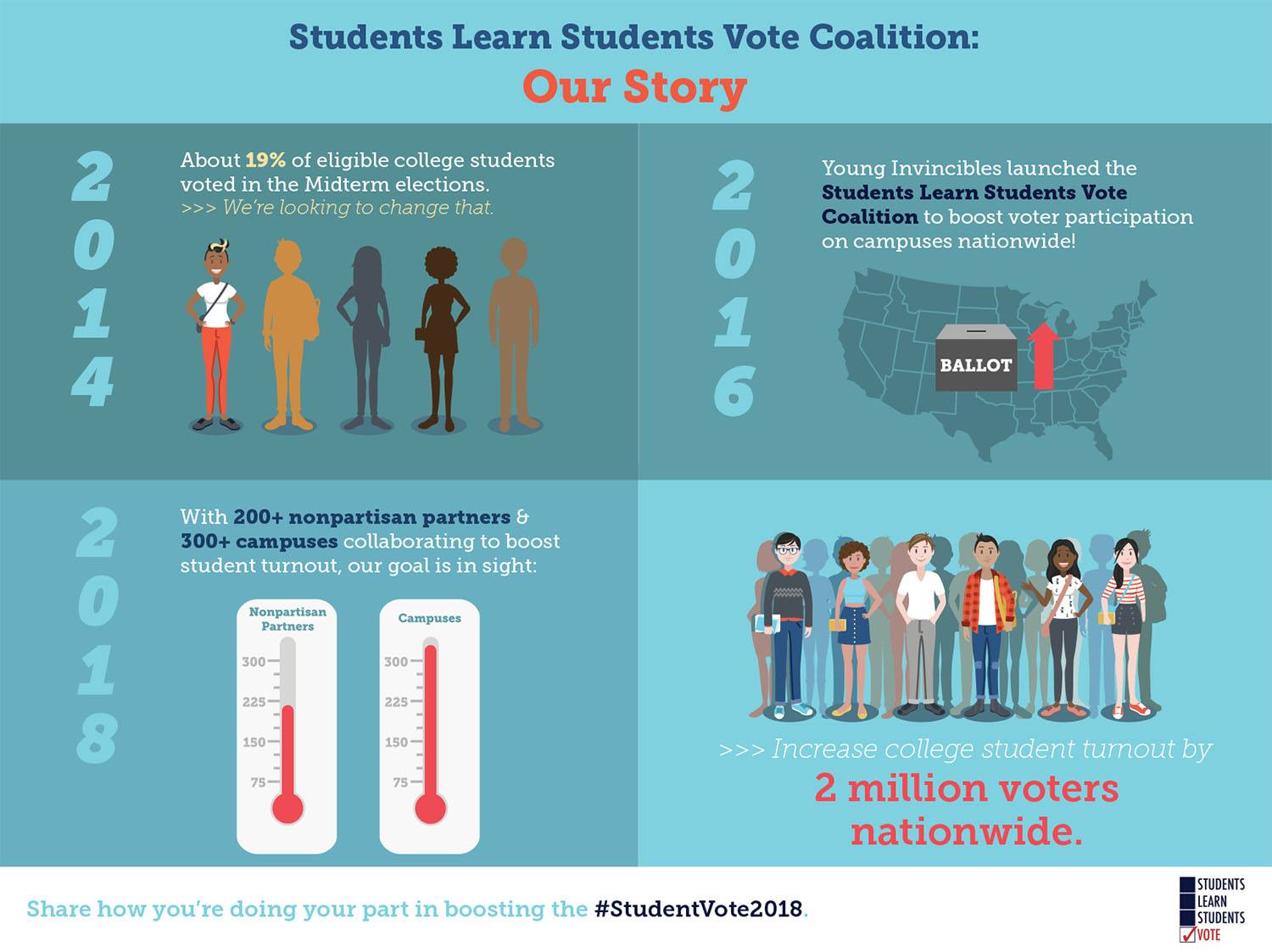 Young Invincibles amplifies the voice of young adults in the political process and expands economic opportunity for the millennial generation. It does this by building a community of young leaders to act for social change, sharing the stories of young adults, conducting cutting-edge policy research and analysis, providing tools for the millennial generation to make smart economic choices and embarking on mission-driven social enterprise ventures. With support from Voqal, Young Invincibles engaged thousands of college students in the lead up to the 2018 election and helped advance critical state legislation.

Student leaders engaged dozens of candidates and journalists covering the midterm elections. This engagement led to many candidates voicing their support for expanding need-based aid, increasing college access for undocumented students and improving services for young parents. In addition, through the Student Power Coalition, Young Invincibles helped mobilize thousands of young people to advocate for policies directly affecting their lives. This work led to several victories at the Illinois State Legislature including the passage of a Student Loan Bill of Rights.

The impact of Young Invincibles’ work to empower students can be best illustrated by student leader Oscar Sanchez. His story shows the power students can have with the support of leadership development, going from participating in an event to spearheading the organization of an advocacy day. Young Invincibles met Sanchez through a gubernatorial forum at Harold Washington Community College, where he was a student speaker. He had not participated in civic engagement activities before, but through conversations Young Invincibles held with student organizers, he came to understand how decision-maker engagement could result in a policy change that would allow his community of Latinx immigrants to earn a college degree.

Young Invincibles empowered Sanchez to engage directly in the policies that affected him. Sanchez was a key organizer of an advocacy day where students from across the city colleges of Chicago and other campuses met with a dozen lawmakers, spoke with the media and hosted a roundtable discussion with three state legislators. This advocacy day provided the critical support needed to advance a bill that would ban the box in the college admissions process to the Senate floor.

Today, Sanchez is a leading member of the Student Power Coalition. He is energized by the power students have and frustrated by campus administrations restricting the student voice. He sees the coalition as a key tool for creating a more equitable higher education system and is planning voter education activities at his campus for the fall.

Voqal is a strong believer of a more educated and empowered world. The work of Young Invincibles to engage students like Oscar Sanchez in the political process is a key element of making that world a reality. We are proud to have supported the Young Invincibles in this work and look forward to its continued efforts in Illinois and nationwide to elevate the voice of the millennial generation.