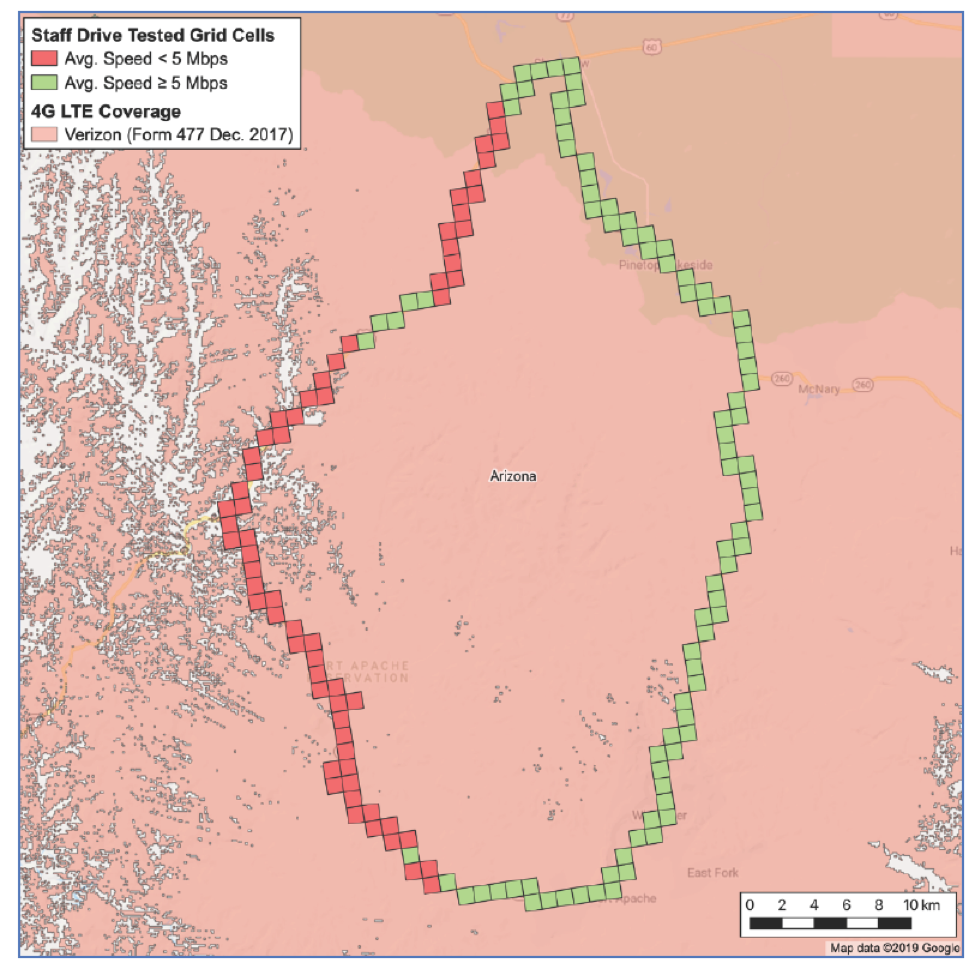 FCC staff determined that Verizon-submitted coverage maps were inaccurate over 35% of the time. Source: FCC

On December 4, the FCC made a major announcement that the Commission would repurpose $9 billion to fund 5G deployment in rural America. So where exactly would the money go? Buried in the press release were the findings of a year-long investigation into the accuracy of cell phone network coverage maps.

Mapping is important for both fixed and mobile service providers because these companies cannot receive federal subsidies for areas that are already served by another competitor. By overstating coverage incumbent providers can prevent competitors from receiving public subsidies to compete. In an earlier post, we wrote about how fixed broadband maps were wildly inaccurate.

For years, wireless customers have complained about coverage. Maps from the largest wireless companies would show strong coverage, but in reality, users would have no signal. As a result of continuous complaints from consumers, companies and Congress, the FCC unanimously adopted a new data collection method for 4G LTE coverage maps. It also established a process to allow the public to submit its own data when coverage did not deliver as promised.

Last December, the FCC became suspicious that maps submitted by Verizon, U.S. Cellular and T-Mobile were possibly inaccurate. Challenger speed tests showed that up to 23% of areas that carriers claimed had 5 Mbps wireless coverage performed well below that.

As a result of this suspicion, the FCC Enforcement Bureau conducted extensive testing of 24,649 on-the-ground network performance tests in 12 states and 5,916 stationary speed tests at 42 distinct locations in nine states.

The key finding of the report shows serious inaccuracies in maps from Verizon, U.S. Cellular and T-Mobile.

“Through the investigation, staff discovered that the MF-II coverage maps submitted by Verizon, U.S. Cellular, and T-Mobile likely overstated each provider’s actual coverage and did not reflect on-the-ground performance in many instances. Only 62.3% of staff drive tests achieved at least the minimum download speed predicted by the coverage maps — with U.S. Cellular achieving that speed in only 45.0% of such tests, T-Mobile in 63.2% of tests, and Verizon in 64.3% of tests. Similarly, staff stationary tests showed that each provider achieved sufficient download speeds meeting the minimum cell edge probability in fewer than half of all test locations (20 of 42 locations). In addition, staff was unable to obtain any 4G LTE signal for 38% of drive tests on U.S. Cellular’s network, 21.3% of drive tests on T-Mobile’s network, and 16.2% of drive tests on Verizon’s network, despite each provider reporting coverage in the relevant area.”

You read that correctly. Over 35% of areas tested by each carrier did not deliver a minimum of 5 Mpbs mobile service – the kind necessary to stream a video online. Worse than that, there was no signal for 16% to 38% of areas tested.

One would think such blatant misrepresentation would result in stiff penalties from regulators, but according to ArsTechnica, the FCC “intends to issue an enforcement advisory to the broader industry, reminding carriers of the penalties associated with filings that violate federal law.” The major defense of the carriers is that they were simply following the FCC rules – the same rules they had warned the FCC were not adequate.

States and other groups that submitted challenge maps are upset with the FCC’s decision not to impose penalties for the inaccurate information submitted by carriers. In one interview, Cari Bennet of the Rural Wireless Association said that local testing of these maps has cost challengers “millions of dollars that smaller carriers could have spent upgrading their broadband networks.” For example, it was revealed that South Dakota had spent nearly $71,000 to audit coverage maps but will not be reimbursed for those expenses. In a hearing last Thursday, House Communications Subcommittee members from both sides of the aisle criticized the FCC for its rollout of the program and the findings of the report.

At Voqal we believe telecommunications policy should contribute to greater social equity for all Americans. Before the next $9 billion goes out the door, the FCC should make every effort to modify its mapping process and hold carriers accountable for this blatant misrepresentation in order to ensure future maps better reflect areas where greater connectivity is needed.