Plenary Day 2: Tech is Everywhere and We’re All In Charge 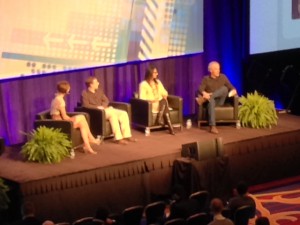 There may have been less tears on stage this morning, but Friday’s opening plenary at #14NTC was inspiring nonetheless. The session started with the announcement of several awards given to organizations and individuals using technology for good in the nonprofit space. That was followed up by a touching Microsoft video showcasing its efforts to use technology to unite and inspire people.

This morning’s main event was a roundtable discussion hosted by NTEN CEO Amy Sample Ward between Michael Enos, CTO of Second Harvest Food Bank of Santa Clara and San Mateo Counties, Gouri Sadhwani, Executive Director of the Akanksha Fund, and Rick Cohen, Director of Communications and Operations for the National Council of Nonprofits. Self-proclaimed “accidental techies,” the three primarily discussed the constantly shifting technology landscape. From discussions on how tech fits into the org chart to the value of tech as a disintermediation tool, the conversation covered considerable ground.