Plenary Day 3: Change is Coming. Are You Ready?

The crowd was a bit slower moving this morning after last night’s revelries, but eager nonetheless to hear Willa Seldon from Bridgespan Group discuss new trends in the intersection of technology and philanthropy. 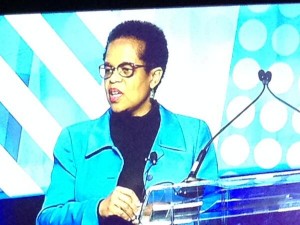 After a handful of meaningful awards were given, Ms. Seldon took the stage and declared this morning’s meeting an “important gathering of the tribe.” She began her keynote by reinforcing the pivotal role technology is playing in the nonprofit world. Declaring that while facing “big, hairy social problems” isn’t new to NTEN attendees, the role of analytical tools and data in making these changes is evolving.