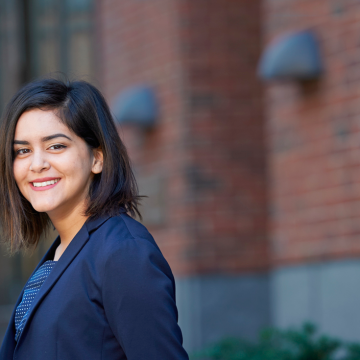 Nieves is the co-founder and project lead at Streetwide. Before founding Streetwide, Alicia was a legal fellow with Justfix.nyc, a housing tech nonprofit in New York City where she helped low-income tenants use the Justfix web application to build affirmative legal cases against their neglectful and abusive landlords.

Nieves is a 2016 graduate of New York University School of Law, where she was a Latina/o Human Rights Scholar and staff editor for the NYU Journal of Legislation and Public Policy. Her previous work experience includes positions at the NYC Mayor’s Office of Immigrant Affairs, New Economy Project, Atl.Legal and FWD.us. Her work centers on developing technology and protocols for mobilizing disadvantaged communities.

Her project, Streetwide, is a nonprofit project leveraging technology and data for immigrant communities. Streetwide’s awarding-winning software allows allies and impacted communities to work together to deliver emotional and legal support to individuals and their loved ones impacted by immigration arrest and deportation. Nieves will work closely with immigrant communities across the country to understand how technology and data can be used to create and sustain community-led emergency response infrastructure for the growing number of individuals and families affected by this crisis. 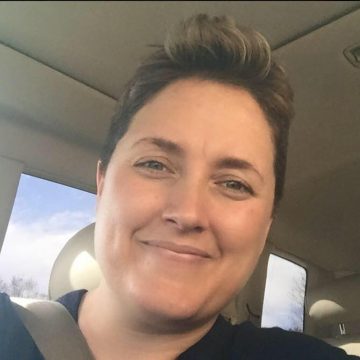 Royster currently works as a digital/communications strategist who most recently built the digital program for Deb Haaland for Congress. Prior to this, Amber led New Mexico’s LGBTQ civil rights organization through campaigns for marriage equality, transgender student protections, and the statewide ban on conversion therapy, while also rebranding the organization, tripling its online reach and more than doubling its annual revenue.

Royster also served on active duty in the U.S. Navy from 2000-2006 and has held positions in state government, NGOs and the private sector. She grew up in Albuquerque, New Mexico and holds a Bachelor of Arts degree in Communications and a Master of Public Administration degree from The Evergreen State College in Olympia, Washington.

Her project, Where to Start, is focused on helping small nonprofits that, for systemic and practical reasons, rarely have the time, money or other capacities to effectively and efficiently communicate their brand, work and stories to the community-at-large. Effective communications are especially important for building support and engagement, which in turn creates the opportunity for investment; and, in an age where Americans spend nearly six hours a day online, it’s crucial this communication happen in the digital sphere.

The product will be a “one-stop-shop” website for digital content and communications – including websites, social media, marketing, list building, graphic design, email, fundraising and more – accessible to nonprofits with a social justice mission and budgets less than $500K per year, that helps them: 1) find and implement no-low cost digital tools; 2) easily develop scalable digital plans based on budget, staffing and goals; and, 3) engage and troubleshoot with other nonprofit community members building digital programs. 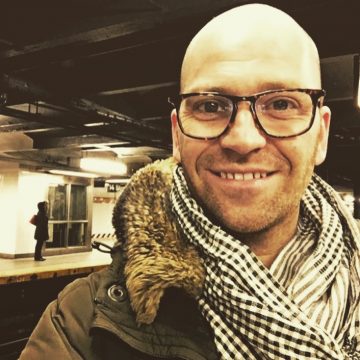 Vaeth is the founder of How to Help. He has also served on the team that opened and built the Consumer Financial Protection Bureau, hosted The Resisters podcast and worked across the nonprofit sector for social change. Chris is a graduate of Cornell University and Harvard Divinity School.

His project, How to Help works in the news cycle to connect people with ways to do something about the day’s big stories. 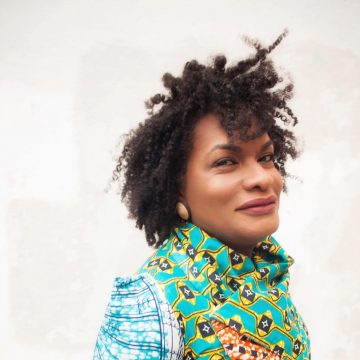 An Emmy and Peabody Award winner, Jones is a genderqueer on-air news analyst, writer and host whose work focuses on the full range of social justice and equity issues. Imara has been featured regularly in a number of leading outlets such as The Guardian, The Nation, MSNBC, CNBC, NPR, Mic and Colorlines.

Currently, Jones is developing a news program aimed at Millennials of color called The Last Sip. Imara has held economic policy posts in the Clinton White House and communications positions at Viacom. With degrees from LSE and Columbia, Imara also advises nonprofit organizations on branding and communications strategy.

Jones’ project, The Last Sip is a video news program — with a pop culture sensibility — aimed at progressive Millennials of color, especially women and the LGBTQ community. The weekly half-hour news program will make national issues concrete for viewers by focusing on those people and organizations driving social and economic change at the grassroots level.

At the heart of the show is the belief that its audience of 32 million Americans is where both the hope and future solutions lie. Their activation and mobilization through relevant news presented in a compelling way is what the program will seek to achieve during its initial eight-week pilot phase. 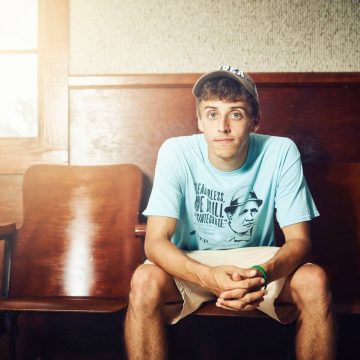 Smith is the co-founder and Executive Director of the Rosedale Freedom Project. Originally from Virginia, Mr. Smith traveled to the Mississippi Delta with Teach for America in 2012. Working as an English Teacher at the High School in Rosedale and inspired by the work of the Sunflower County Freedom Project, Jeremiah became convinced that, if given the right opportunities, students in Rosedale could compete with students from America’s most prestigious schools. In that spirit, he worked for two years as the Director of Literacy Programming at the SCFP and worked to open the Rosedale Freedom Project for its first Freedom Summer program in 2015.

Smith is also completing his Master’s degree at Delta State University as a member of the TFA Graduate Fellows program. Jeremiah currently lives and works in Rosedale, Mississippi.

His project, For The Record, is a program designed to empower underserved students in Rosedale to tell the story of their community with a critical eye toward systems of oppression. For the Record gives students access to the tools and training necessary for documentary storytelling, and to help them use their work to engage their community in social change. 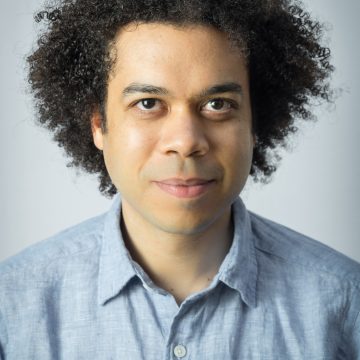 Micah White, PhD is a lifelong social activist known for co-creating Occupy Wall Street, a social movement that spread in 82 countries, while an editor of Adbusters magazine.

A sought after global speaker on the future of activism, White has delivered numerous lectures at prestigious universities—including Princeton, Swarthmore, Middlebury and the University of Chicago—along with cultural festivals and private events in Australia, Belgium, Brazil, Canada, Denmark, Italy, Indonesia and the United States.

White’s first book, The End of Protest: A New Playbook for Revolution, was published in 2016 by Knopf Canada and the German edition, Die Zukunft der Rebellion, will be released in 2018 by Blumenbar.

White’s project,  Activist Graduate School is an online educational institution designed specifically for the needs of experienced activists who want to take their movement work to the next level.

Its emphasis is on university caliber seminars on history, strategy and the theory of social change through collective action. The difficulties faced by recent social movements in achieving immediate change, despite their tremendous speed and overwhelming size, is a sign that activism as a discipline must embark on a period of paradigmatic reevaluation. What is needed now more than ever is an educational institution that is designed specifically with the needs of experienced activists in mind: an environment where activists can collaboratively study in search of the next theory of change that will spark a successful transformative social movement.

Activist Graduate school is a creative educational environment for the practical, urgent and important task of addressing the deep theoretical and strategic challenges facing social movement creators. Our mission is to enable activists to expand their repertoire of collective action and evolve how they approach the challenge of social change. 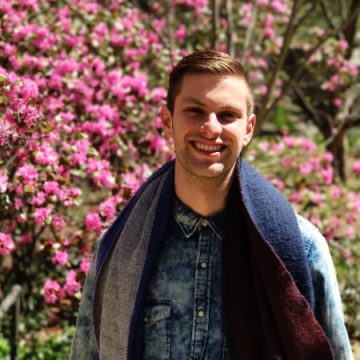 Guthman is a progressive political organizer based in Washington D.C. For the past five years, he has worked on local and national electoral races, as well as issue advocacy campaigns surrounding racial justice, health care and tax fairness. Nick focuses his energy on rapid response and social media organizing, with a special emphasis on youth outreach and engagement.

Guthman’s project, Blue Future, will strengthen progressive youth activism by creating a clearinghouse website, social media campaign, and the infrastructure for a national coalition to coordinate, broaden and optimize the work of youth civic engagement organizations. There is a ton of youth energy as a result of our current political climate. Blue Future aims to facilitate coordination and disseminate information to turn that energy into action. 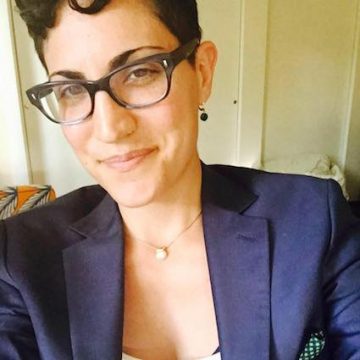 Frank brings over 15 years of work in politics, social change, women’s philanthropy, and fundraising to her role as Co-Founder of Maiden.

Frank spent seven years as a Deputy Director for J Street—the single-largest pro-Israel PAC in the US—working to transform the way Congress and the Executive branch engage in the Middle East and to promote the creation of a two-state solution to the Israeli-Palestinian conflict. During Frank’s tenure, J Street partnered with the Obama Administration to successfully push the Iran-Nuclear deal through Congress and prevent a war with Iran.

Frank holds a degree in Government and Political Theory from Smith College. She hails from the Redwood Coast of Arcata, California and after spending eight years in the nation’s capital, she recently found her heart back in the wild west where she is currently living in Boulder, CO.

Frank’s project, Maiden, creates a more intelligent economy by diversifying the leaders, makers, and culture of Blockchain Technology. In the coming five to ten years, Blockchain technology is likely to dominate the global economy giving a chance to introduce entirely new leaders and to shift the balance of who has access to financial resources. Maiden carries out its mission through two major initiatives: 1) Blockchain Education: Teaching modern cryptocurrency investment and development skills to women, people of color, LGBTQ+ people and others who have not traditionally had access to wealth. 2) Culture & Leadership: Creating new spaces in tech and finance that tap into the power of multiple identities and intelligences.