Protecting the Right to Protest 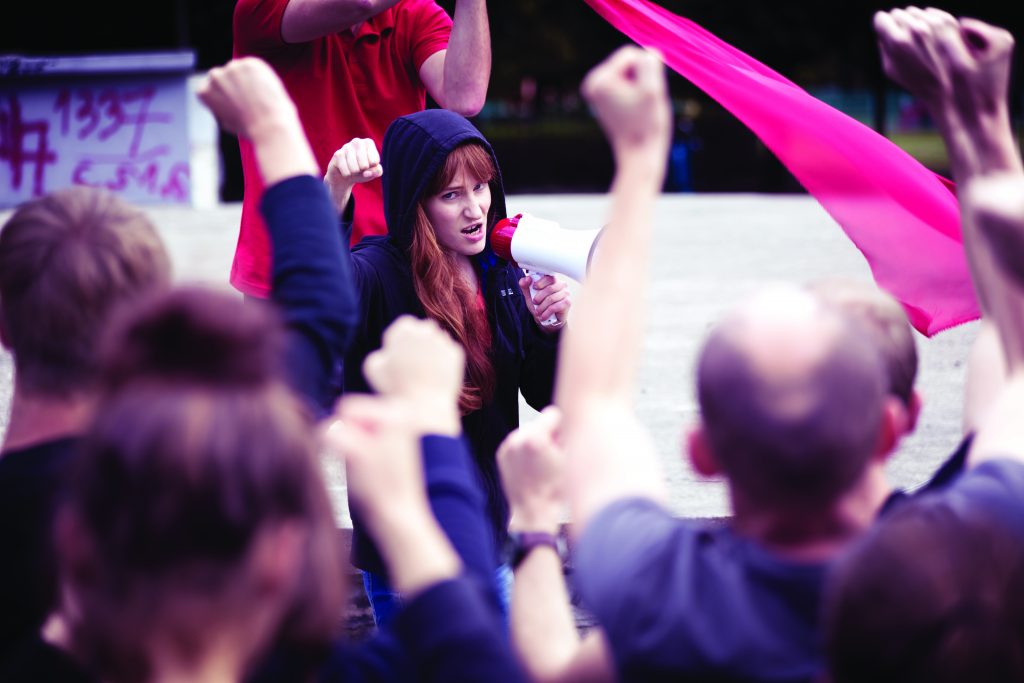 In this month’s grantmaking spotlight, Brenda Sears celebrates the upcoming Disobedience Day by highlighting three grantees who use civil disobedience to effect meaningful policy change in their communities.

Protesting is often depicted as unpatriotic, unacceptable and unbearable by the privileged people benefiting from the current unjust system. However, the United States Constitution explicitly provides for the right of people to join together in protest or peaceful assembly. The United States Bill of Rights asserts that the authority of a government is derived from the consent of the governed, and whenever any form of government becomes destructive, it is the right and duty of the people to alter or abolish it.

Throughout history, protesting has been an effective means for changing laws and protecting liberties. Protests played a significant role in many social reforms including the abolition of slavery, the anti-war movement, the women’s suffrage movement, the labor movement, the civil rights movement, the anti-nuclear movement and the environmental movement. Perhaps, because protests have been so effective in social movements, this right is currently being criminalized in many places.

This year, we have seen a record number of anti-protest bills in state legislatures with several already having passed. The bills impose excessive fees for protesting, restrict the protest rights of certain groups of people like teachers, prohibit face coverings during protests, criminalize protests that block infrastructure like roads and pipelines, create unreasonable penalties for protestors and make organizations supporting the protests criminally and financially liable for any unlawful behavior by protestors.

July 3 is Disobedience Day. This day normally honors acts of civil disobedience like trespassing on a British ship and throwing its cargo overboard, refusing to enlist in the military, occupying draft centers, refusing to allow military recruiters on campus, submitting to arrest to gain the right to vote, giving sanctuary to people, interfering with the transportation of nuclear bombs and disrupting business as usual.

Now we can add simple, peaceful protests. And if this anti-protest legislation continues, it is not a stretch to imagine that one day in the near future petitioning, lobbying, writing letters, going to court and voting for candidates will be made illegal as well. That is why I would like to use this day to highlight three Voqal grantees that are fighting anti-protest legislation and/or are continuing to organize protests in their communities.

ONE Northside
One Northside works to build the power of those most directly impacted by community problems in Chicago. It encourages civic participation and develops community leaders to become vehicles for social, economic and racial justice. The critical issues ONE Northside addresses include education, affordable housing, mental health justice, youth, economic justice, violence prevention and health care.

TakeAction MN
Take Action MN is a statewide network of people in Minnesota working to pass more progressive policies and laws, to improve institutions, and to change harmful ideas and perceptions. Its legislative priorities include having access to health care when you need it, earning enough to support your family with dignity, being giving a second chance to build your future, and securing a clean, equitable energy future for all.

Civil disobedience usually only comes about once decent, law-abiding, hardworking people reach the conclusion that the legal means for addressing their concerns is not working. Whether using legal protest or civil disobedience, the people behind these organizations sacrifice their comfort, safety and freedom to the movement. The silver lining is that if these strategies for making real progressive change were not working, there would not be an effort to criminalize them.