Back in September, Blair Levin and Larry Downes authored a much-talked-about opinion piece that made a bold claim: America’s Cities – not its rural areas – are the real cause for concern when it comes to the digital divide. Their main argument is that while many believe rural broadband access is the reason for the digital divide, urban internet adoption is a greater factor.

So, what does the data tell us? The FCC’s 2019 Broadband Deployment Report found that while 98.3% of urban areas have access to broadband, just 73.6% of rural areas have access. The 26.4% of rural areas without service available equates to about 16.8 million Americans (by contrast, 4.49 million Americans in urban areas simply do not have broadband available). Rural access is an issue that certainly deserves attention. After all, there will be no broadband adoption if service is not available.

Perhaps the bigger finding from the report is that only 60.2% of Americans subscribed to broadband speeds of 25/3 Mbps. In other words, 39.8% of Americans are not broadband subscribers. While 21.3 million Americans simply cannot subscribe because they have no service, the number of nonadopters balloons to 129.6 million when we consider these adoption rates. This is a problem worthy of serious attention (if we consider 10/1 Mbps service, 30.1% or 98 million Americans are non-subscribers).

Urban centers are the primary cause of this divide. Urban residents are much more likely to have broadband available to them but tend to subscribe at a lower rate. The National Digital Inclusion Alliance (NDIA) released its annual Worst Connected Cities report to pinpoint urban areas with the worst connectivity. Using 2017 American Community Survey data from the U.S. Census Bureau, NDIA ranked 191 U.S. cities. The NDIA project measures the number of households who have adopted – it does not examine service availability. 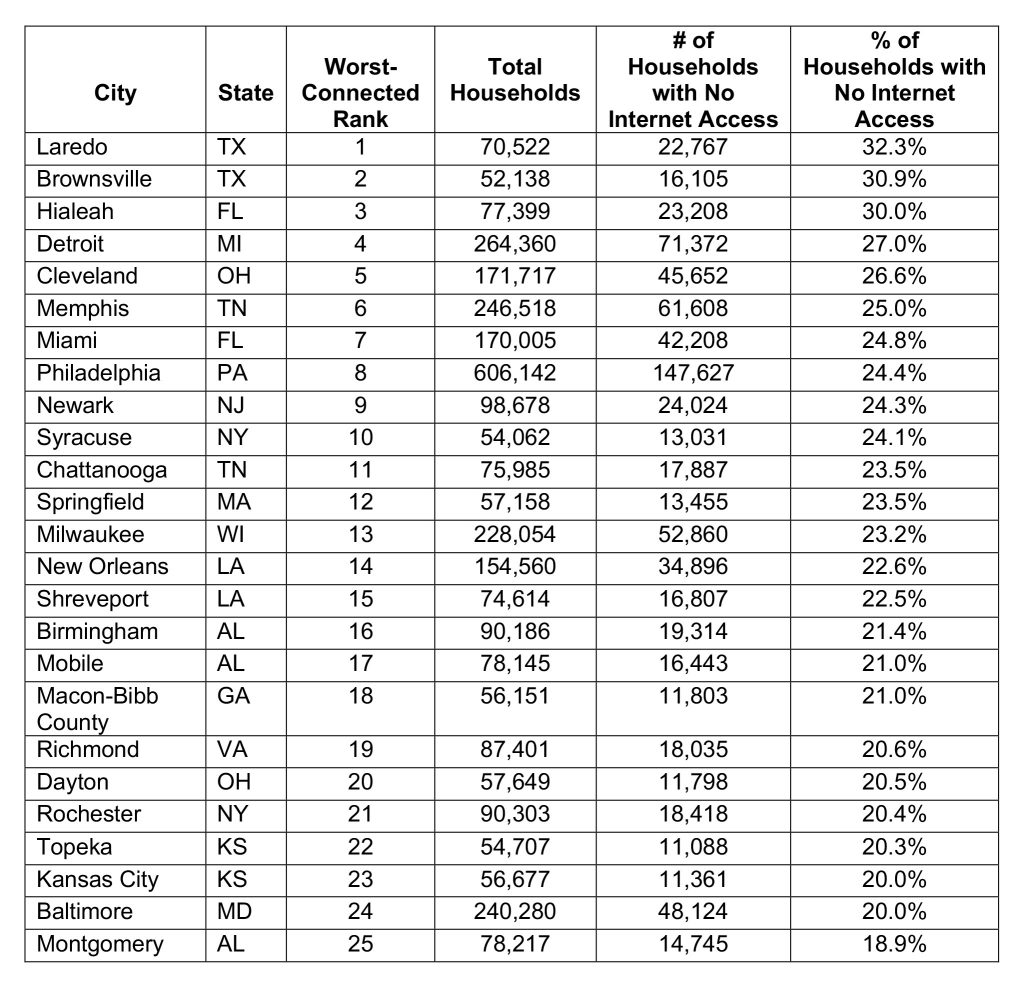 In total, these 25 communities make up 784,636 households without internet service. Using an average of 2.6 persons per household, this adds up to about 2.04 million people.

The truth is the digital divide is complex and difficult to solve. In urban areas, service is typically available, but many choose not to subscribe. The most commonly-cited reason is the cost but as Levin and Downes point out, relevance may also be an important factor. In rural areas, service may simply not be available. Levin and Downes point out that advancements in technology, including satellites and fixed wireless, may help reach these hard-to-reach rural households.

The FCC should continue to fight the digital divide on both fronts, but it should also understand that the urban adoption gap may be a quicker and more cost-effective strategy to close the digital divide in the near-term. Simply delivering service is not enough. In particular, the FCC should focus on addressing the Homework Gap. Neglecting this gap prevents many at-risk, school-aged children from having broadband at home. In addition, school-aged children may help the overall adoption rate as they expose their parents to broadband for the first time. This is a win-win policy that needs greater consideration.