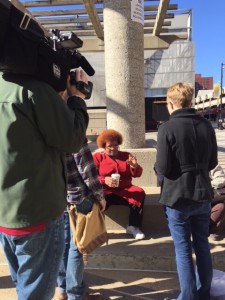 Kansas City residents gathered yesterday to protest Sprint’s shutdown of broadband access to 300,000 vulnerable Americans, including 150+ Kansas City families, and deliver a petition to Sprint headquarters. Their message to Sprint and its CEO, Marcelo Claure: Practice what you preach and keep our Internet on.

The group gathered near midday in downtown Kansas City before delivering a petition with over 5,000 signatures from supporters across the country to Sprint headquarters. The petition urges Sprint to honor its commitment to bridging the digital divide and keep schools, libraries and nonprofits online.