Voqal has long been an advocate for using Educational Broadband Service (EBS) to empower communities and connect the unserved and underserved. All Americans deserve an opportunity to participate in digital society. Unfortunately, far too many Americans lack true broadband access. According to the FCC’s 2018 Broadband Deployment Report, about 24 million Americans lack access to broadband, which is defined as download speeds of 25 Mbps and upload speeds of 3 Mbps. 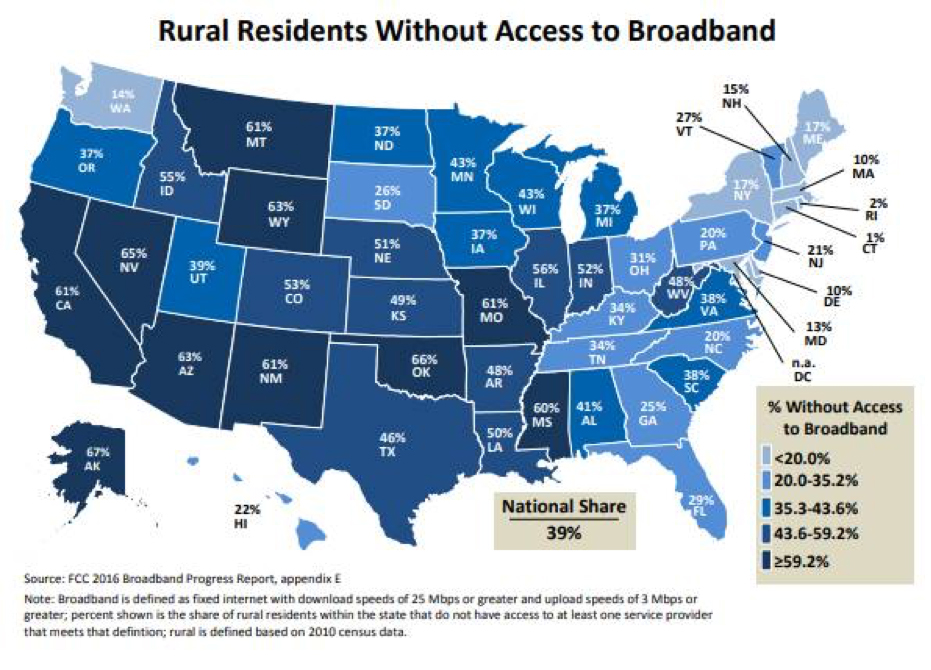 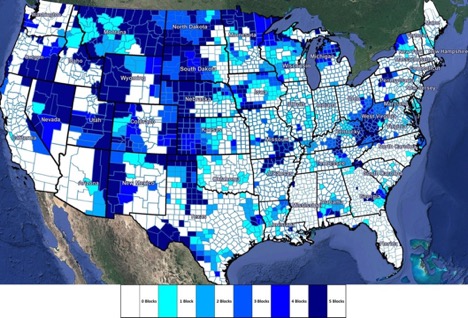 Note: This map assumes current licenses would be expanded to the nearest county boundary. The white space indicates no channels available, and the darker shades indicate a greater number of EBS channels are available. There are 5 EBS channel groups (A, B, C, D, G) each covering 23.5 MHz of spectrum.

In May, the FCC proposed new rules aimed at licensing unused EBS channels to educational entities and tribal nations using an application window. The so-called local priority filing window would allow local entities the ability to acquire an EBS license. The licensee would then have two options – partnering with a commercial partner by leasing their spectrum or deploying their own network where commercial operators are unwilling to serve.

One reason the FCC is considering offering educators the chance to self-deploy is, well, it works! Perhaps the best example of an EBS self-deployment can be found at Northern Michigan University. The President of NMU, Fritz J. Erickson, recently wrote an op-ed explaining how the university has become an internet service provider throughout the Upper Peninsula of Michigan using EBS.

“In 2008, Northern Michigan University (NMU), located in Michigan’s rural Upper Peninsula (U.P.), elected to tackle the lack of adequate broadband access in its community head-on. With over 8,000 notebook computers assigned to its students, NMU launched an aggressive plan to construct the nation’s first educational WiMAX network. To make it work, NMU turned to the Broadband Division of the FCC’s Wireless Telecommunications Bureau for assistance securing an Educational Broadband Service (EBS) spectrum license needed for WiMAX operation. For the next eight years, NMU provided robust, fixed-wireless, off-campus broadband access for our students, faculty, and staff engaged in educational pursuits.

Ultimately, the NMU network will cover 21,548 miles of rugged, rural terrain, connecting previously unserved and underserved communities throughout the U.P. Simply put, without EBS, NMU’s network could not have been built and subscribers throughout northern Michigan would likely have remained on the wrong side of the digital divide”

The NMU example is one of the reasons Voqal has been a strong advocate for the FCC to pursue this plan. NMU’s EBS network deployment is so impressive, they have received visits not only from FCC Chairman Ajit Pai, but also President Obama. Offering local rural communities this tool and the ability to attract or build their own broadband service has proven successful at closing the digital divide and homework gap in rural and Tribal communities.

You can help by telling the FCC and your Congressional representatives to #SaveEBS by supporting these application windows.