Voqal strongly believes that closing the digital divide is integral to closing the social justice and equity gap in America. That is one of the reasons why Voqal created Mobile Citizen, a project that distributes wireless hotspots to students (via educational institutions), low-income families (via nonprofit resellers) and nonprofit organizations.

There are two key components to addressing the digital divide – ensuring all Americans have access to broadband service and that Americans are able to subscribe to that service. The good news is the Federal Communications Commission (FCC) publishes data on both broadband access and adoption. The bad news, as we have highlighted before, is that the FCC’s data may not be entirely accurate because it is dependent upon broadband providers submitting their own figures. Carriers are allowed to claim an entire Census tract is “served” if they serve a single household within it.

It is clear that market forces alone will not close the digital divide. So, what exactly is the strategy to reach the 21.3 million mostly rural Americans lacking any broadband access at home? For its part, the FCC created the Connect America Fund (CAF) to distribute subsidy money to providers willing to serve these hard-to-reach households over the next 10 years. As part of CAF Phase II, the FCC held what is known as a reverse auction, in which providers offered the lowest cost possible to serve these households and the lowest bidders won the subsidy money. In some areas, winning bidders will deliver high-speed fiber to rural households. In others, consumers will be stuck with high latency satellite internet service.

CAF Phase II will distribute $1.49 billion in subsidy money to organizations planning to serve over 713,000 locations. One of the big winners in the CAF Phase II is satellite internet company Viasat, which will receive $122.5 million to serve 190,595 locations in 20 states. 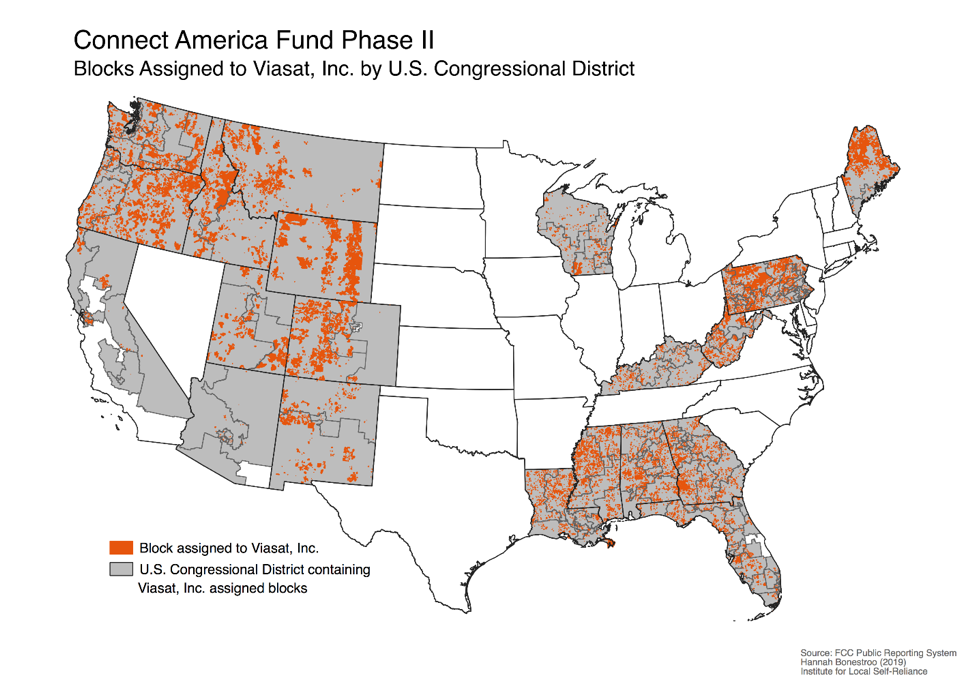 Herein lies the rub. Some CAF II providers will need to deploy fiber deeper into networks to connect communities or help provide backhaul for fixed wireless service. But for satellite winners like Viasat, no new deployment is required. As the FCC points out, satellite service is already available to 99.97% of the U.S. population. According to Katie Kienbaum at MuniNetworks, despite serving 122 million U.S. households, Viasat only has 586,000 subscribers, signaling low demand. Satellite providers will not expand coverage and will simply pocket the CAF II cash.

The real problem for rural communities is that only one provider is able to receive subsidy money to support buildout in a given area. Other providers seeking support for better quality networks will not be eligible for broadband subsidies in areas in which Viasat has received subsidies for six years. For consumers, it means satellite internet or nothing.